Please find an invitation to consider your giving of time, talents and money to St Luke’s and make any changes you may wish to.

If you missed Paul’s reflections and invitations to Stewardship in July, you can find them here: 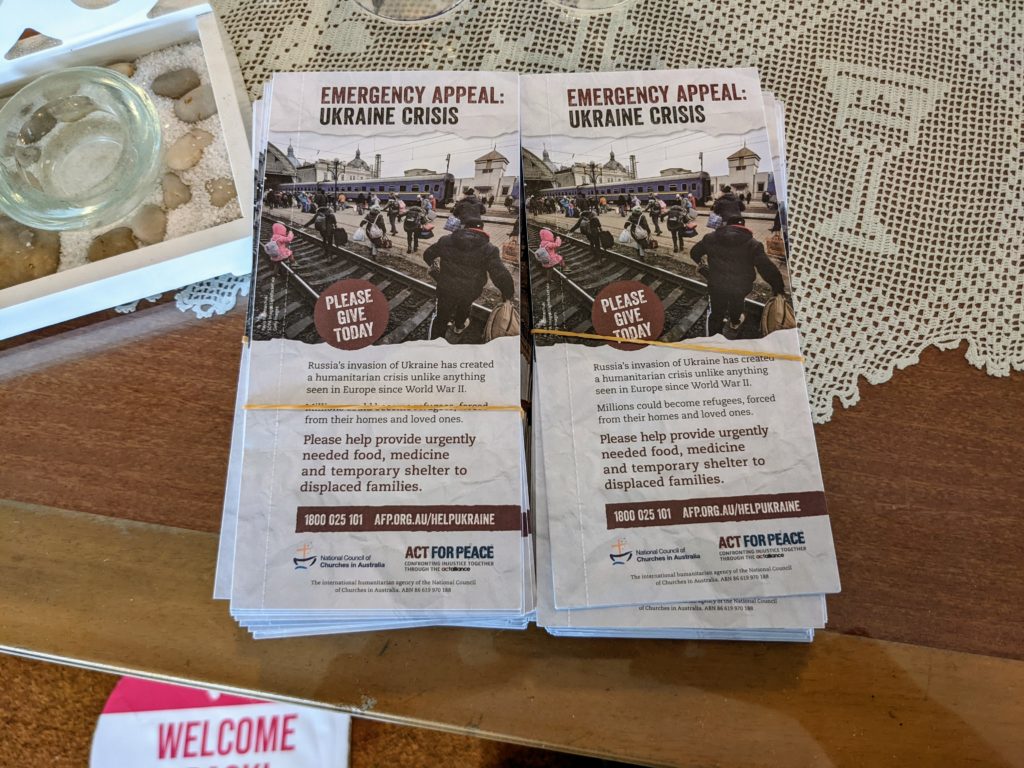 The Russian invasion of Ukraine has created a humanitarian crisis unlike anything seen in Europe since World War II – and throughout the history of the Christmas Bowl.

According to the UN refugee agency, in just over a week more than 1.5 million refugees have already fled their homes in Ukraine to neighbouring countries. And millions more people could become refugees, forced from their homes and their loved ones if the fighting continues.

As you may know, we’ve launched an emergency appeal to support the people affected by the conflict in Ukraine and I hope that you will find time during this busy season to take part. This is a situation we must respond to together.

I have written to thousands of churches across Australia. I am asking you and the members of your church to join us as we respond to Christ’s call to love our neighbour.

Your congregation has been faithful and generous supporters of the Christmas Bowl and Act for Peace’s work over many years.

I pray that you are moved by the Spirit and heed God’s call to help displaced families forced from their homes by this horrific conflict.

Our ACT Alliance partners in neighbouring Hungary have already sent truckloads of relief to support families forced from their homes by the war.

The shipments include 28 tonnes of canned food, flour, sugar, oil, rice, pasta, biscuits, long-life milk, tea and hygiene products which will be distributed at the Beregszasz and Uzhhorod reception centres in Western Ukraine. But much, much more is needed.

While I know it’s an incredibly busy time for churches with Lenten preparations taking place, this senseless violence in Ukraine is causing an urgent need.

I was reflecting on this week’s Psalm, Psalm 91, and the words of the Psalmist really struck me, especially those in verse five.

“You will not fear the terror of the night, or the arrow that flies by day.”

Those words took on new meaning as I heard the reports from our ecumenical partners telling us of families hiding, and mothers comforting terrified children as they shelter from the missiles of invading forces. It is my prayer that these resilient people stay safe and are able to take refuge in the Lord.”

This Sunday, please pick up an envelope and use it to donate to the emergency appeal for Ukraine.  Or you can donate online here:

St Luke’s received a thankyou letter and certificate of appreciation today for our donations to the Christmas Bowl in 2020.  The Christmas Bowl is part of our commitment as a church to ecumenical action – churches working together for good.

Thankyou to everyone from St Luke’s who contributed! 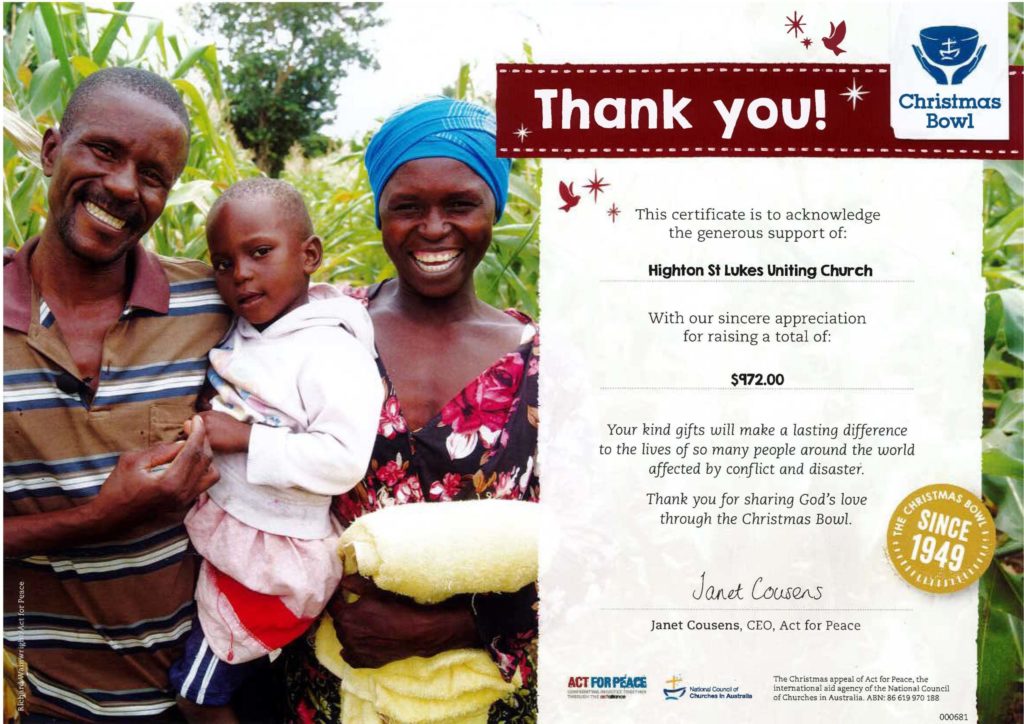 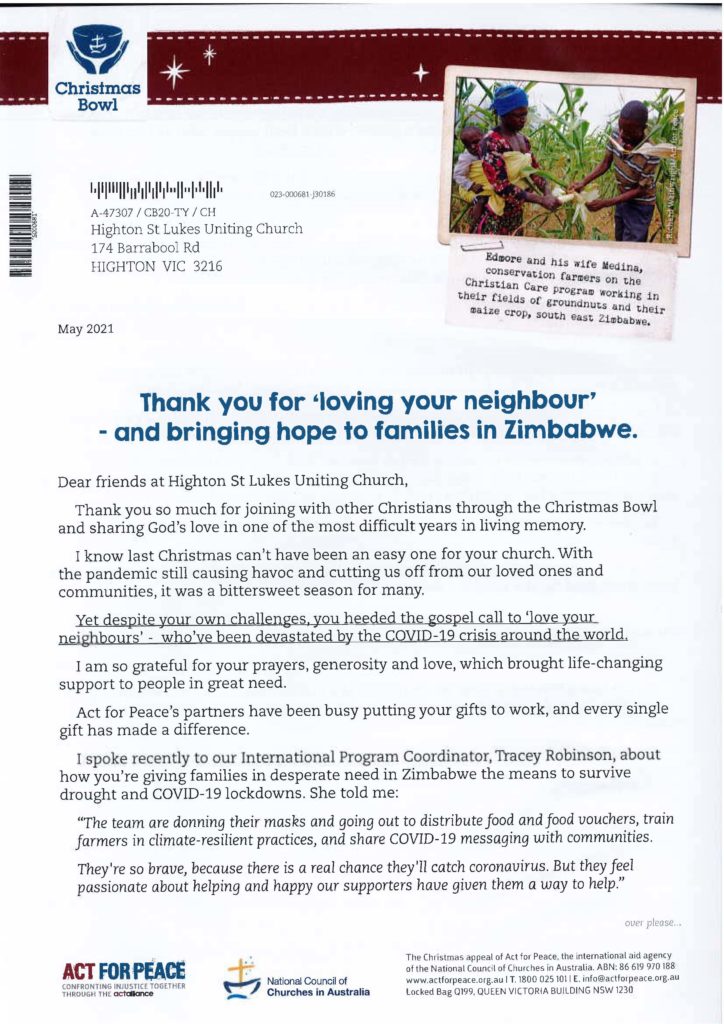 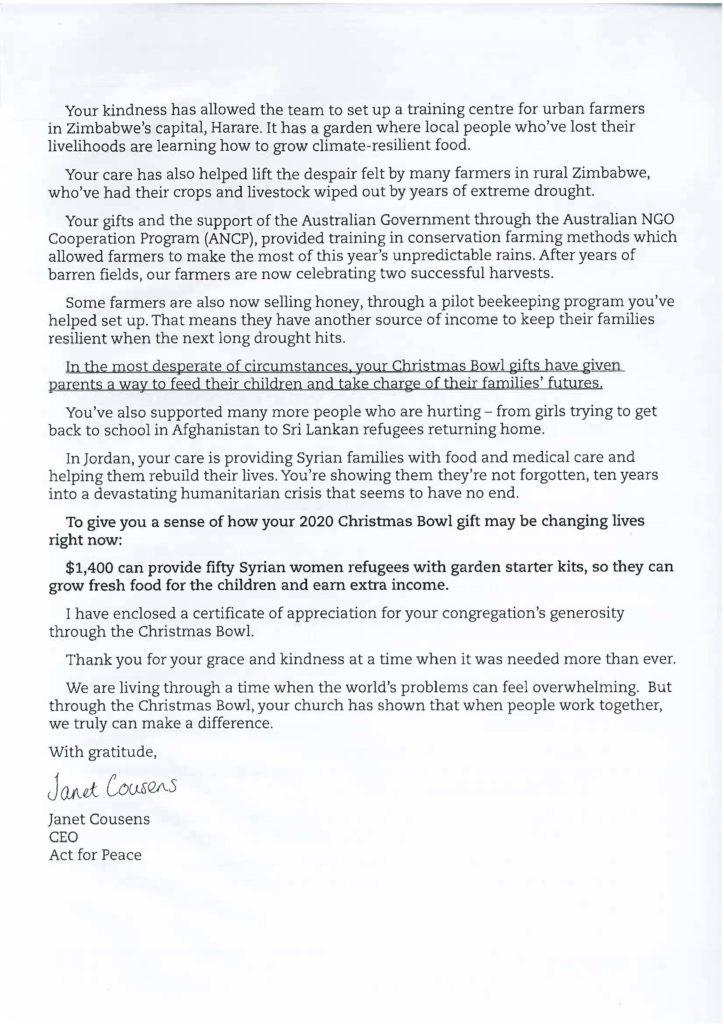 The focus of Share Sunday this year is on Youth Homelessness, with the theme ‘A place to call home.’

Your congregation was sent a pack that shared the story of Bronte and how Uniting supported her through a challenging time in her life.

Unfortunately there have been delivery delays with Australia Post, meaning many of you have not received these resources to use on Sunday.

Many thanks for your ongoing support.

Anyone who’s had kids in Australia would understand that whenever there’s Milo in the house, it disappears very quickly!!

Our helpers at Uniting Grovedale have a request – while you are at the supermarket this week, could you pop a small tin of Milo in the trolley for Uniting?

The folk who rely on supplementing their food needs from Uniting’s emergency pantries in Grovedale and Norlane would very much appreciate this small treat for their kids. As the ripples of COVID-19 restrictions continue to be felt in our community, Uniting’s Emergency Assistance pantries are experiencing higher demand.  Now that we no longer gather each Sunday in person, the number of food donations to Uniting from St. Luke’s is dropping.

But!  You can still help!

The church office is open between 10am and 12 noon on Tuesdays and Fridays to receive donations in our trolley – these are take to Uniting by Jean Daw who is a regular volunteer there.

Jean has advised that the following items are currently needed:

The regular list of items for you to add to your shopping includes:

Your donation of a few items from your weekly shopping makes a huge impact on our ability to help people in need – thanks for your support!

The St Luke’s Environment Group are growing seedlings of herbs, veggies and flowers for the bushfire victims to start their gardens and add a bit of colour.  Jean Daw is going to Bairnsdale end March for starters, with a load for the victims in that area. All pots to be at St Luke’s 11am Sat 21st March to be loaded in her car.  We may have more going to other areas as well.

If you are interested in helping, please see one of the Environment Group – Claire, Michelle, Jean, Jenny, Ian A, Ian L, Phil.

Pastoral Connections have been seeking contacts who could take and make available to those in the fire-ravaged areas some of our hand-knitted and crocheted shawls, with a card assuring those suffering that we are praying for them. We have had a wonderful response, with the following distribution numbers and areas:

We still have some available to give to those in fire areas. Please contact Beth on 52436874 if you know of someone who could be comforted by the gift, or who can take into the areas for distribution. Pillow Pledges introduced in 2017 has proved very successful and we are forever grateful to those who have supported us in the past.  We are asking once again for donations.

As we live out St Luke’s Mission outreaching to Refugee, Asylum Seekers and other people in need, we provide new pillows, and under strict health regulations on pillows we can only provide ‘new’ pillows when needed. April and November are the months when we ask for your support when running these Appeals.