In so many places in the Bible we are reminded that as the people of God we are called to strive for the best for the community as a whole. The people of Israel who were exiled in the strange land of Babylon were challenged by the word of the Lord that came to the prophet Jeremiah, (29: 7), to “… seek the welfare of the city.”

Jesus calls us to love our neighbour, whoever that neighbour might be.  And Jesus so often sought to bring healing for the broken, the rejected and the lost.

As Christians we thus cannot remain passive when we see deep hurts in our city and country. And clearly one such hurt is the damage caused by the currently uncontrolled nature of gambling.

At the Gambling Forum that St Luke’s hosted on the afternoon of October 9th, Rev. Tim Costello addressed questions related to what can be done in response to this scourge. Tim currently is the public face and voice of The Alliance for Gambling Reform. (The Alliance national advocacy organisation which works to prevent and minimize the harm from gambling.)

In introducing Tim and the theme at this Forum, I made the following comments:

The Mission Outreach Ministry Team of this congregation was meeting a few months ago; and Sue Anderson the convenor handed out an article from The Geelong Advertiser which detailed the most recent mind-numbing statistics related to the amount of money being fed into poker machines in this region.

The group responded in the way many of us have in recent days with a deep sense of sadness about the damage being done to individuals, families and the community as a whole by the industrial scale of gambling in this city. There was also a sense of powerlessness.

All right, we know the statistics, what can we do about this disease?

As a couple of people have asked me, “What can you say to young males (and it is so often young males), who are still at school, who attend a footy match and use their phones to gamble on every aspect of the game?”

In recent days there have been many voices seeking action from governments.

In NSW, Stu Cameron, CEO and Superintendent, of the Uniting Church’s Wesley Mission and Sandy Grant, Anglican Dean of Sydney wrote an open letter to that state’s political leaders. This letter reminds the political leaders in NSW of the damage being done by gambling, notes that Australians are the world’s most prolific gamblers and also asks for a unity ticket on this matter in that State’s politics … that all sides of politics would agree to do something.

A segment on the 7.30 program on Wednesday October 5th on the ABC underlined the strong tide of concern in the community about gambling advertisements and gambling Apps.

The St Luke’s Mission Outreach Ministry Team at that meeting I have mentioned felt it needed to do something and decided to organise the forum: a forum that was about “Next Steps.” And the Team was therefore so pleased that Tim agreed to make the trip to Geelong to address this topic.

You can watch the Forum on the Congregation’s YouTube channel: https://www.youtube.com/channel/UCJAL8289CyXTVBd-Y8dvT6Q

You can find out more about the Alliance for Gambling Reform, with which the Uniting Church is formally associated, at www.agr.org.au

From Dale at Uniting:

“We are pleased to send you the Winter 2022 Congregation Connect.  In this edition,  you can read about:

We have also included copies of our latest Uniting Heritage newsletter.  The Uniting Heritage Service supports and their families who were adopted, spent time with foster care providers, in children’s or family group homes,  and in orphanages.

If this out-of home care was provided by former Presbyteryian, Methodist or Uniting Churches, we help people piece together memories and better understand their past. ”

Pick up your copies from the St Luke’s foyer this Sunday. 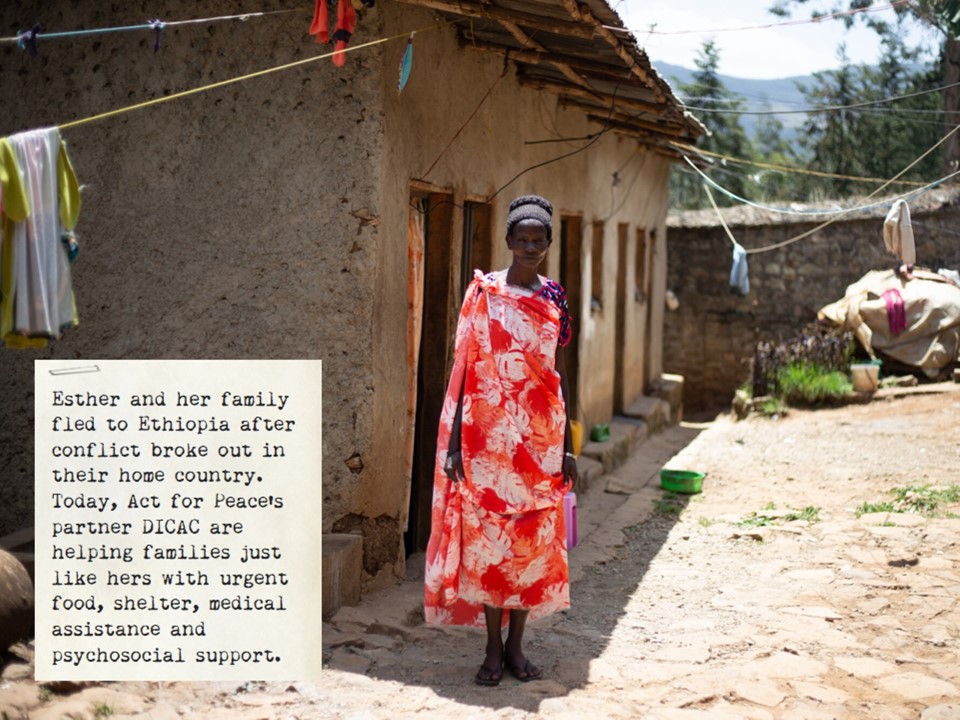 Friends, we are excited to let you know that this year for the first time, we are able to donate to the Christmas Bowl online – much more convenient for those of us who don’t deal in cash or cheques!

I do hope this email finds you safe and well in these challenging times!

I am writing to you to let you know that a copy of the Uniting Vic.Tas Spring Congregation Connect has now been made available on our website for congregations to access. In this edition, you and members of your congregation can read about Rachael, who was supported through the Victorian Government’s From Homelessness to a Home initiative, hear the difference our Winter Blanket Appeals have made and learn about the opening of a new facility for older women at risk of homelessness.

Our Spring Supporter Newsletter, which features stories of hope in the face of crisis has also been made available online. On page 5, there are examples of just some of the ways our dedicated teams have kept our support going during these challenging times. You can also read about the difference your giving has made this past winter and discover new ways to get involved.

It might seem early to be talking about Christmas however I wanted to let you know that our Uniting Christmas cards are now available to order with 4 new additions to the range. Each design has been thoughtfully selected to reflect the joy and hope of Christmas and all proceeds will support people in crisis. As current restrictions have once again made it too difficult for many of you to complete orders for your members by consignment this year, I have attached a copy of the Christmas Card poster and a PDF order form you can pass on to your members. Please note we have made the order form fillable for anyone wanting to complete and email it back to us without printing. Alternatively, they can pre-fill the details prior to printing and mailing it back to us if they prefer this to manually writing their details.

Cards can be also be ordered by calling our Supporter Services on 1800 668 426 or visiting our Christmas Card site.

We are always seeking feedback on how we as your community services organisation is performing and are keen for your thoughts on how Uniting can work better as part of the Church to respond to Christ’s invitation to serve humanity by creating an inclusive, connected and just world. To help do this, we invite you to offer your reflections here and encourage you to share this link with your congregation members so they also have the opportunity to share their thoughts on how we are performing.

If you need to update your contact details or wish to amend the number of hard copies you are mailed in the future, please contact Ida or me on 1800 668 426.

Greetings Fair Trade Supporters,
With slavery on the increase, more children in child labour and Covid-19 devastating communities in poorer nations it is good that the Fair Trade Association has produced a shopping Guide where the proceeds of sales go directly to helping some of the most vulnerable people in the world.
I hope you will enjoy perusing this Shopping Guide. It would be wonderful if you could share this link with others.
https://issuu.com/fairtradeassociation/docs/fair_trade_christmas_shopping_guide_2021_final_ 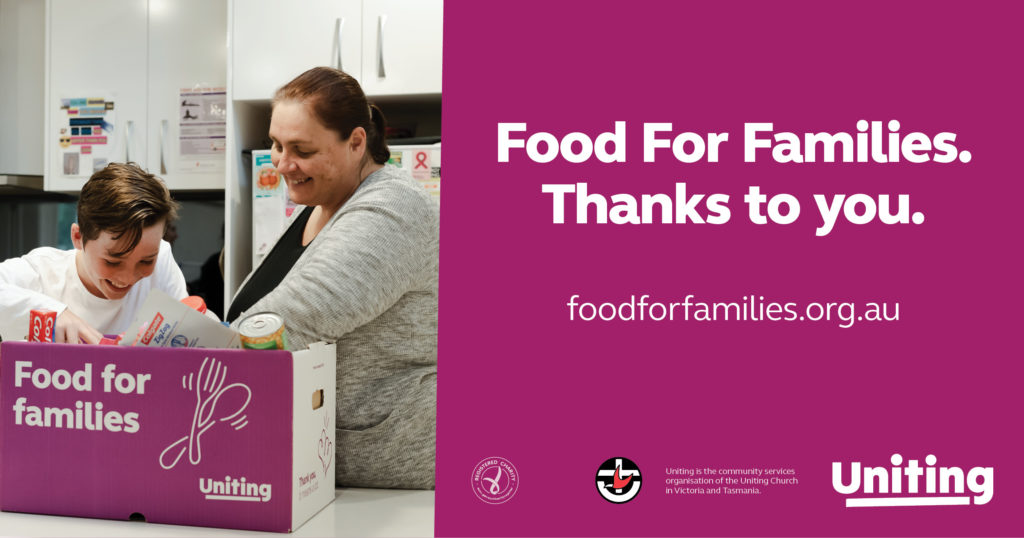 As you may be aware, demand for emergency food supplies are increasing in the Barwon region.  Uniting runs emergency food pantries in Norlane and Grovedale, and St Luke’s is a designated drop off location for food items.

Currently the emergency pantries are in need of:

You can drop items into St Luke’s on Tuesdays and Friday mornings between 10 and 12 noon.

There are many other ways to be involved in the food for families program – see here: https://foodforfamilies.org.au/get-involved-individuals-families/

Uniting Barwon Emergency Food Room are in need of:

These items can be dropped off to St Luke’s Highton, Tuesday and Friday mornings or can be dropped at Uniting Barwon’s Grovedale location (https://www.unitingvictas.org.au/locations/grovedale-272-torquay-rd/)

During sharing the journey (Sunday 27th June worship), Jean mentions items that the Uniting Barwon Emergency Food Room are in need of:

These items can be dropped off to St Luke’s Highton, Tuesday and Friday mornings or can be dropped at Uniting Barwon’s Grovedale location (https://www.unitingvictas.org.au/locations/grovedale-272-torquay-rd/)

From Jan at Uniting Barwon:

Uniting Barwon people will be assisting with;

Those assisting will be given some time to participate in and enjoy the activities taking place.

If you are interested in assisting in any of the roles please contact Des Younghusband by Thursday 27th May 2021, please also enquire of your families, friends, acquaintances and network members if they might be available to help.

If you are unable to assist please consider coming along to enjoy the activities and again encourage your families, friends, acquaintances and network members also to do this .

Attached is a flyer for the event feel free to pass it on to your contacts or request more copies from Des Younghusband.

To register to assist or if you have any queries Des Younghusband’s contact details are:

So many wonderful events in Melbourne are now available to us through the option to attend via Zoom!  Pilgrim Theological College is where our ordained and lay people undertake their training for ministry and ongoing professional development and formation in the Uniting Church in Victoria.

“The first Northey Lecture for 2021 will offer the theological viewpoint of an Australian First Nations theologian who has spent the past two decades decolonising biblical narratives and constructing a theology that draws on Australia First Nations creation stories (Ancestral Narratives) and our understanding of the Creator’s actions and interactions through our Spirit Ancestors in the creation of our world, humanity, customs, laws, ceremonies, songs, rituals, connection to land, water and sea; language, cosmology, worldview and philosophy – this being the basis to the formation of First Nations identity, faith and Spirituality.”

Dr. Anne Pattel-Gray is an Aboriginal woman who is a descendant of the Bidjara/ Kari Kari people in Queensland and she is a recognised Aboriginal leader within Australia – nationally and internationally. She has dedicated her life to the struggle of Aboriginal and Torres Strait Islander people and she is a strong campaigner and lobbyist and deeply committed to seeking justice, equity and equal representation for Aboriginal & Torres Strait Islander people. She is very proud of her Aboriginal culture and heritage and is a strong advocate for Aboriginal women, children, families and community regarding our Cultural and basic Human Rights. She has developed a leadership quality that promotes and builds a deeper sense of community and participation that brings a greater Aboriginal and Torres Strait Islander heritage and cultural identity and cohesion with the broader community that leads to beneficial partnerships, engagement and reconciliation.

You can read more and register here: