This year’s Tributes Service will be held at Wesley Church (Lonsdale St Melbourne) on Saturday, July 23 from 2.30pm. Traditionally held during Synod meetings, the service honours ministers who, since the previous Synod meeting, have been ordained, retired or received from other denominations, or celebrated 50, 60, 65 and 70 years since ordination or commissioning. The service will also be livestreamed.

UC members gathered in Melbourne recently for three days of discussion, deep engagement and discernment as part of Synod 2022. All three days and the Opening Worship service, which featured the installation of Moderator David Fotheringham, can be found on the Synod 2022 YouTube channel, while daily updates were posted to the Crosslight website.

Applications for 2022 Share Grants are now open. Since 1980, the Share Grants program has provided financial assistance to enhance the quality and scope of UnitingCare and Uniting Church services to the community in Victoria and Tasmania. With the program now part of Uniting Vic.Tas, this year’s grants are once again available for parish missions, congregations and others in the community.

The role of history and truth-telling in working towards a more just and self-determined future for First Peoples is the subject of a webinar on July 21 organised by the Uniting Church National History Society. First Nations leaders and historians will be part of the Zoom event exploring the Uluru Statement from the Heart. 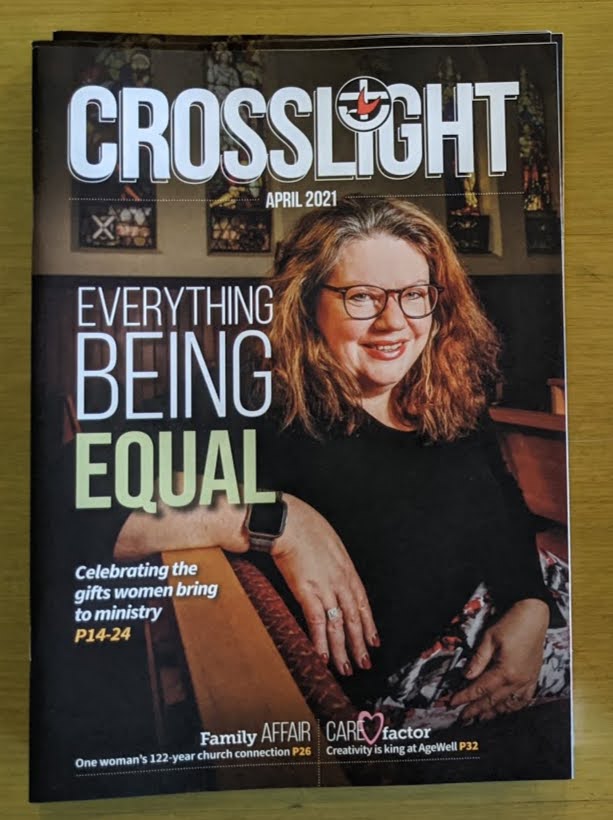 Every 2 months, we receive copies of the Crosslight Magazine from the Synod of Victoria and Tasmania for St Luke’s members.  The magazine has many interesting articles about people and ideas in our wider Uniting Church family.

This year I have noticed that we have quite a few copies left over.  To avoid waste, I would like to order accurate numbers for people who are interested in receiving it.

Please contact Robyn at the church office by the 16th of May if you would like a copy reserved for you.

The story of our life turns, when we are known and called by name.

Back in 1992 (and here I’m revealing my age), I heard the Red Hot Chilli Peppers’ song ‘Under the Bridge’  for the first time. It was during Lent, just before Easter. I’m not sure if I can express quite well enough in  words how deeply it struck me. It wasn’t just the words; it wasn’t just the music; it wasn’t just the deeply  personal backstory of Anthony Kiedis who wrote the song. It was also my own story at that time, and of  friends and people I loved. My story was very different to Kiedis’ story, but there a connection all the  same. I was living with my own life challenges back then – as all of us do from time to time.

Somehow, all of those things came together, and the song touched deep into my own life experience. It  was emotional and visceral and personal.

Kiedis originally wrote this song as a poem, expressing his experience of isolation and despondency – in a  very urban-West-Coast-American kind of way. He wrote of being drawn back into a memory of a not long-past, absolute-lowest-point in his life, during a time of heroin addiction. That low point was when he  was literally and metaphorically under a bridge, abandoning the ones who loved him in favour of the next  score, and utterly alone.

A few years later, he was in a different place. But the memory of that pain was still alive and easily brought  to the surface. As he remembers, he cries out from the depths of his soul:

I don’t wanna ever feel, like I did that day.

Take me to the place I love, take me all the way.

Kiedis was singing about re-lived pain and alienation, and the ‘place’ he wanted to be instead: with friends  and love and trust in his life. Can he go back to remember the way he felt that day when he was under  the bridge? No! That was a way he never wants to feel again!

If you don’t know this song, you can easily do an internet search, watch a video clip, and listen to Kiedis  sing this poem of his heart and soul.

Just a warning though: the music style and images of the Red Hot Chilli Peppers performing thissong may  not be quite your cup of tea. But music and the stories they carry have a way of touching us, even when  the musical style isn’t ordinarily our cup of tea. So maybe it’s worth a listen … again … or for the first time.

This particular song has somehow managed to cross boundaries of musical taste, capturing the  imagination of people who would never normally listen to alternative ‘90s American rock. Maybe the  music that calls to your soul comes from Gregorio Allegri, or Gurrumul, or The Beatles, Ayub Ogada, Billie  Eilish, Arvo Pärt, Aretha Franklin, or the beloved hymns of your particular culture and history?

There’s something about the way that music, poetry and stories can touch into the experiences of our  lives, even when they are from other people and lives very different to our own. They can still give light  to turning points in our own experience. And in these graced moments, God can open up our hope and  the possibility of a different reality, and pull us in to an alternative way of living and being.

I think there’s something like this in the way John’s gospel tells the story of Mary in the garden while it  was still dark. She is meeting a person she thinks is the gardener, because her tears and sorrow and grief  overwhelm her vision. This story is emotional, it’s visceral, it’s embodied, it’s personal. It touches into  our own pain, to times where we too could say, ‘I don’t wanna ever feel, like I did that day.’

But the story goes on. It tells us about a glimpse of hope that emerges, revealing that something else is  possible. And it all turns on someone Mary thought was a stranger, who calls her by name.

The person she thinks is a stranger, speaks to her, “Mary!”

I wonder when you have experienced something like this? Perhaps there was someone you thought  didn’t know you from a bar of soap, someone you thought couldn’t possibly have cared less about you.  And then they called you by name. And in that moment you discovered: ‘this person knows who I am!’

How does it make us feel? … when we thought we were an anonymous, insignificant, faceless person in  the crowd? … and discover, instead, we are someone known by name?

Being known and called by name makes us into people considered by others as being of value and of  worth. It means we matter to someone else. It means we are part of a community that considers us an  integral part. It signifies that we are cared about, that someone else knows whether we are there or not,  and maybe, even, how we are going.

This story of Mary and the risen Jesus, told to us in John’s gospel, tells us that it is not just a distant cosmic  force, or disembodied principle of goodness, that we believe in or proclaim.

This story of Mary and the risen Jesus, tells us a human-divine story, a story of real life, a story of life lived  in God and God living in and with us. This risen Jesus calling Mary’s name, is calling our name as well.  This risen Jesus touches in to our own real life-saving experience of what it means to be known personally by God, and to know we belong and are cared about for who we are.

In this story, we know our pain, our longing, our hope and our life.

In this story, we hear the One of God, who knows us and speaks to us by our name.

In this story, we are pulled deeply into the life of the beloved community of Jesus, where we are known and called by name.

In this story, we are called into the life of the risen Christ – to know and call each other by name – no  longer strangers to each other.

As we emerge ever more from this time of pandemic, we have been asking ourselves how we can connect  more deeply into our wider communities. How can we be real, embodied and connected communities,  not just with our own preferred group of friends we already know, but wider and deeper and beyond?

Maybe it’s as simple and as difficult as coming to know each other by name? … really knowing each other  by name?

May we be shaped, formed and filled with the life of the risen Christ who calls us by name; for in Christ, we are no longer strangers, but friends.

Some of you may be subscribed to the Synod e-news updates, but in case you aren’t, here are the links for you to read the 2 latest ones:

The Synod of Victoria and Tasmania meets approximately every 18 months to hear reports, discern proposals, and discuss matters that concern the general oversight, direction and administration of the life of the Church.

Originally scheduled for November 2020, due to the impacts of COVID-19 it was decided that the Synod meeting be deferred until February 2021 and to be held as a virtual (online) meeting from February 26-February 28.

Rather than a challenge, the Synod Business Committee invites the Church to see the opportunities which this new way of meeting presents.

Synod 2021 is an opportunity to gather together the breadth of today’s Church.

The entire meeting, excluding any member-only sessions, will be broadcast live for members of the wider church.

Please note that people watching the live broadcast sessions are not able to ask questions of, or interact with, the Synod meeting.

The first session begins at 1.45pm on Friday February 26 with the final session finishing at 3.15pm on Sunday February 28.

The Justice and International Mission Cluster is asking you to be part of a taskforce on climate change action. The taskforce’s purpose is to identify, encourage and support the implementation of measures across the Synod to reduce our greenhouse gas emissions. To lodge an expression of interest, contact Mark Zirnsak at mark.zirnsak@victas.uca.org.au or on 0409 166 915 by October 28.